U.S. Coast Guard Cutter Mackinaw is an icebreaking vessel on the Great Lakes that assists in keeping channels and harbors open to navigation. Here, the USCGC Mackinaw arrives in Duluth via Lake Superior on March 24, 2014. Credit: NOAA

Ice formation on the Great Lakes is a clear sign of winter!

Looking back in time, the lakes were formed over several thousands of years as mile-thick layers of glacial ice advanced and retreated, scouring and sculpting the basin. The shape and drainage patterns of the basin were constantly changing from the ebb and flow of glacial meltwater and the rebound of the underlying land as the massive ice sheets retreated.

The amount and duration of ice cover varies widely from year to year. As part of our research, GLERL scientists are observing longterm changes in ice cover as a result of global warming. Studying, monitoring, and predicting ice coverage on the Great Lakes plays an important role in determining climate patterns, lake water levels, water movement patterns, water temperature, and spring algal blooms.

Doing research to improve forecasts is important for a variety of reasons.

Ice provides us a connection to the past and also serves as a measure of the harshness of current day winter weather. Understanding the major effect of ice on the Great Lakes is very important because ice cover impacts a range of benefits provided by the lakes—from hydropower generation to commercial shipping to the fishing industry. The ability to forecast and predict ice cover is also really important for recreational safety and rescue efforts, as well as for navigation, weather forecasting, adapting to lake level changes, and all sorts of ecosystem research. One great example of the importance of forecasting is illustrated by an incident that occurred in Lake Erie on a warm sunny day in February 2009 when a large ice floe broke away from the shoreline. The floating ice block stranded 134 anglers about 1,000 yards offshore and also resulted in the death of one man who fell into the water. While the ice on the western sections of the lake was nearly 2 feet thick, rising temperatures caused the ice to break up, and southerly wind gusts of 35 mph pushed the ice off shore. Having the ability to forecast how much ice cover there will be, where it may move, and what other factors like temperature, waves, or wind might play a role in what the ice is going to do, is incredibly important to a lot of users.

GLERL’s ice climatologist, Jia Wang, along with partners from the Cooperative Institute for Limnology and Ecosystems Research, use two different methods to predict seasonal ice cover for the Great Lakes. One, a statistical regression model, uses mathematical relationships developed from historical observations to predict seasonal ice cover maximum based on the status of several global air masses that influence basin weather. This method forecasts that the maximum ice cover extent over the entire Great Lakes basin, will be 64%. The other forecast method, a 3-dimensional mechanistic model, is based on the laws of physics that govern atmospheric and hydrodynamic (how water moves) processes to predict ice growth in response to forecast weather conditions. This method predicts a maximum ice cover of 44% for the basin this year.

As you can see, the two methods have produced different answers. However, if you look at the last chart here, you’ll see that three of the lakes show good agreement between these two model types–Lakes Michigan, Erie, and Ontario. Continued research, along with the historical data we’ve been monitoring and documenting for over 40 years, will help GLERL scientists improve ice forecasts and, ultimately, improve our ability to adapt and remain resilient through change.

Below, is the most recent Great Lakes Surface Environmental Analysis (GLSEA) analysis of the Great Lakes Total Ice Cover. GLSEA is a digital map of the Great Lakes surface water temperature (see color bar on left) and ice cover (see grayscale bar on right), which is produced daily at GLERL by Great Lakes CoastWatch. It combines lake surface temperatures that are developed from satellite images and ice cover information provided by the National Ice Center (NIC). This image is the analysis of January 10, 2017 (13%). For the most current analysis, visit https://coastwatch.glerl.noaa.gov/glsea/cur/glsea_cur.png. 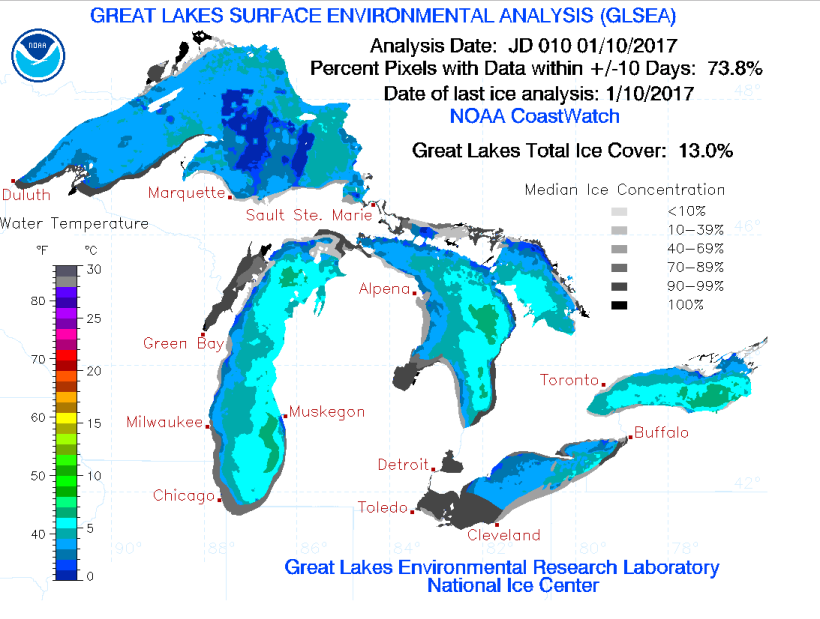 For technical information on GLERL’s ice forecasting program, check out our website here.

You can also find much of the information in this post, and more, on this downloadable .pdf of the GLERL fact sheet on Great Lakes ice cover.

Want to see a really cool graphic showing the extent of the maximum ice cover on the Great Lakes for each year since 1973? You’ll find that here.

One thought on “Ice cover on the Great Lakes”